Capacitive fuel sensor
Description: A capacitive fuel sensor is constructed of two parallel conductors insulated from each other. The amount of capacitance is related to the distance between the conductors and the type of insulation. The insulation between the conductors of a capacitance fuel level probe consists of air and/or fuel. As the fuel lever changes, so does the capacitance. The capacitance is part of an oscillator circuit. As the capacitance changes, so does the oscillator frequency. The frequency is converted to a voltage that is displayed with a fuel gauge.
Advantage: The advantage of a capacitive type fuel level probe is that there are no moving parts and can be used to replace the vehicle own fuel sensor directly without extra hold drill. Cuttable to suit different tank length.
Disadvantage: The disadvantage is that the gauge must be calibrated each time that the type of fuel is changed because unleaded fuel and leaded fuel and gasohol each have different insulating properties. When the fuel tank is almost full, the capacitance fuel gauge will display different levels depending on the type of fuel in the tank. When the tank is almost empty, the fuel gauge will be more accurate because air is now the insulating medium and the probe does not know or care what type of fuel used to be in the tank. Also, electronic spark is not allowed. 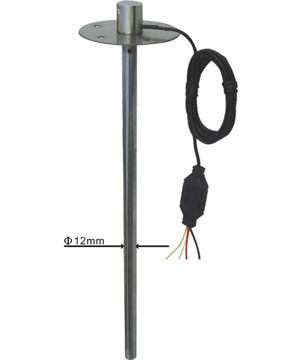 Resistive Fuel Level Sensor
Description: The resistive fuel level sensor is composed of three components: a float, an actuating rod and a resistor. This combination of components sends a variable signal to the fuel gauge or an electronic device-a “GPS Tracker”. The sensor assembly is often referred to as a sender. It is a relatively simple system once the function of each component part understood. Inside the resistor, a device that resembles a tiny windshield wiper is moved over a strip of resistive material by the movement of the actuating rod. The farther along that strip from the grounded end of the resistant strip the wiper is, the less electricity is conducted to it by that material. The wiper is oriented so the most resistance is encountered when the tank is at its emptiest, and the least when the tank is full. As the fuel level decreases the float drops, the actuator rod causes the wiper to move across the resistant strip away from the ground, and less current is passed to the gauge. The needle shows a decreasing reading. When the tank is empty, the float is at its lowest and the wiper is at the far end of the resistant strip from the ground, so very little current is sent to the gauge. The needle doesn’t move far, thus reads “empty.”

Inaccuracies
Often a float will reach the fullest extent of its mechanical travel before the tank is entirely full or entirely empty (Big Error). This explains why many cars have gauges that stay on “full” for a long time before starting to drop after a fill-up, and why some cars can run for many miles on what appears to be an empty tank (Lagging). Also, all sensor parts directly dip in fuel and will lead float or rod erosion (Erosion).

Why use external fuel level sensor?

The reasons to use external fuel level sensor: A. All time monitoring. When Vehicle engine is OFF, vehicle own sensor cannot work. External sensor works all the time as it is connected to vehicle battery directly. B. Accuracy. External fuel[...]